Things with wings in summertime

It's Tag it Tuesday over at http://cardsandmorebysheri.blogspot.com/search/label/Tag%20It%20Tuesday. My tag for this month's theme: things with wings in summertime, goes to one of my favorite people, Heather Kraafter of the Kraaft Shaak. Lots of gloss 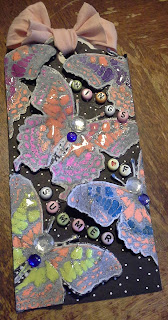 and a little glitter and crackling going on here. Very hard to get a good picture of this one, but when the sun hits it, it so shiny and blingy!
Posted by Nanettesplace at 2:55 PM 2 comments: 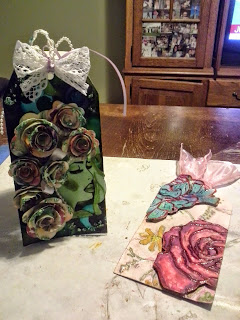 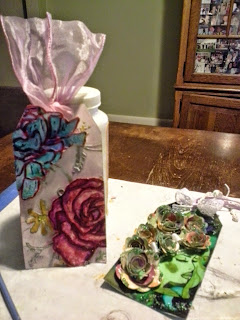 Posted by Nanettesplace at 6:46 PM 10 comments:

Hello friends,
A work in progress. Not to sure I'm happy with the coloring, but I do like the sketch. 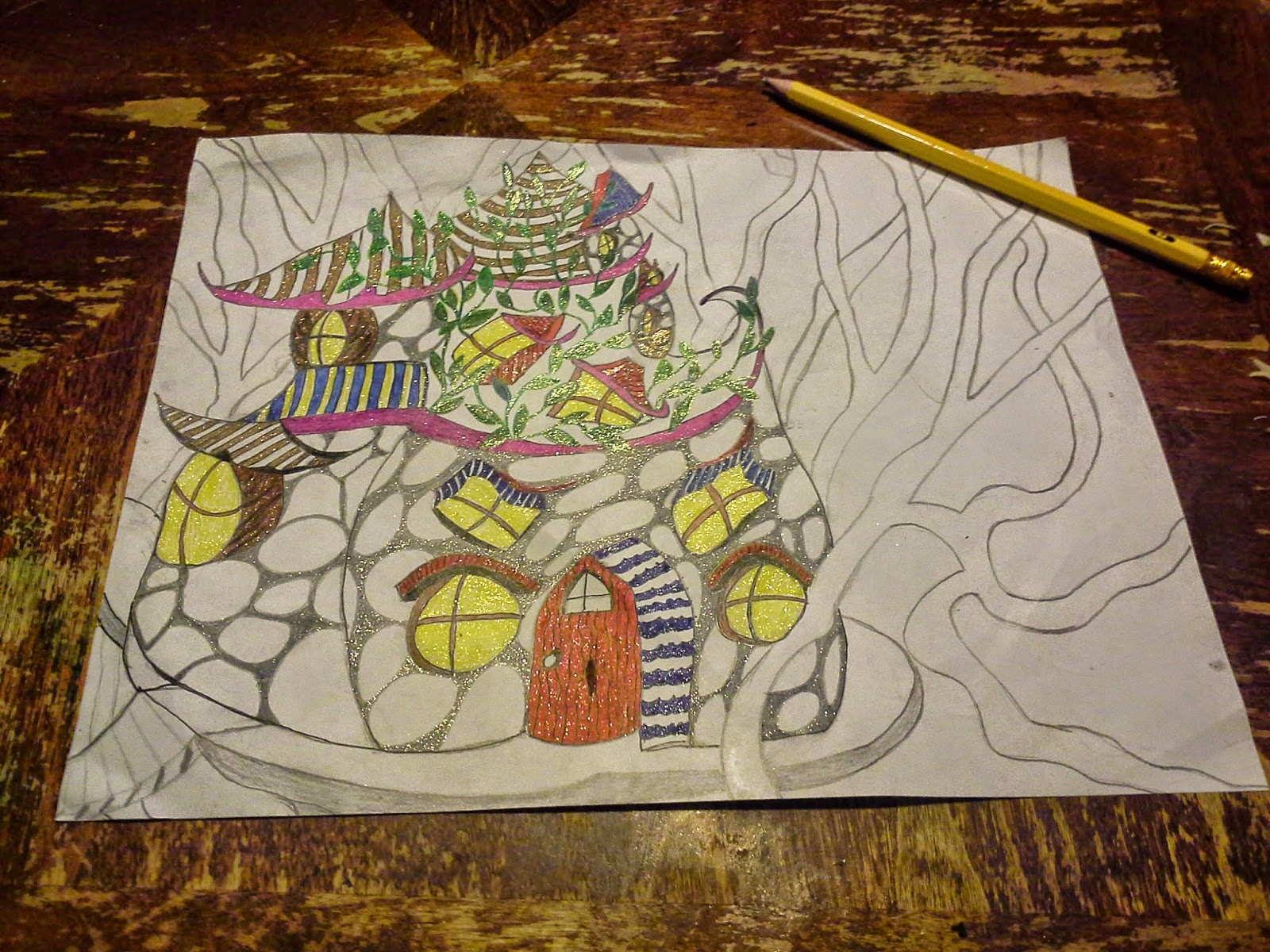 See you soon,
Your friend, Nanette
Posted by Nanettesplace at 4:29 PM 11 comments:

Hello Friends,
A much shorter post! So, what did I do with them? I turned them into cards! Sharon is an easel card.

So I did something a little different with Summer. I want to put the original one in my journal, so I created a new one. I hope you like both of them. For the New Summer, I cut off her hair and re-pieced it in layers and used spellbinders feathers to fill it in. Gelatos, stickles painted on, a jewel on the earring. Cut out the front to her shape.
Posted by Nanettesplace at 10:46 PM 6 comments:

Hello Friends,
This very long post is about the brief summer storm that knocked out power to around 360,000 people in MI. Our power was out from 9/5 till today, 9/7 at 6:15 pm! Without electricity, my husband and I spent some good one on one time together. Not that we don't,  but usually there is the tv on, the tablet going, washing clothes, making dinner, all the things daily living require. Without electricity, we couldn't do household chores. We took to the porch, after cleaning up the yards from debris. The only thing we had was the car radio, which brought about reminiscing.  Which brought me back to fuzzy navels! So, off to the liquor store he goes, and he even had raspberries for garnish. I let them soak as I sipped my drink. Then I squish a few of them to add flavor to the peach and orange in the drink, fantastic. Approaching the golden hour for photography, I get my dslr out and start taking photos of the sky.  I took some nice photos. My husband is afraid of my camera, so he goes for his little point and shoot. We talk, we laughed, and he got tipsy! I mean, I haven't seen him like that since a bachelor's party 20 years ago. Seems he kept refilling his glass while I kept a slow pace with mine. We laughed so hard when I figured out he was refilling instead of sipping! Ok, so the first set of photos are very blurry. They are of the storm, didn't know it but the winds were at 75 miles per hour or higher. So just to show how a camera not on a tripod reacts to high winds. 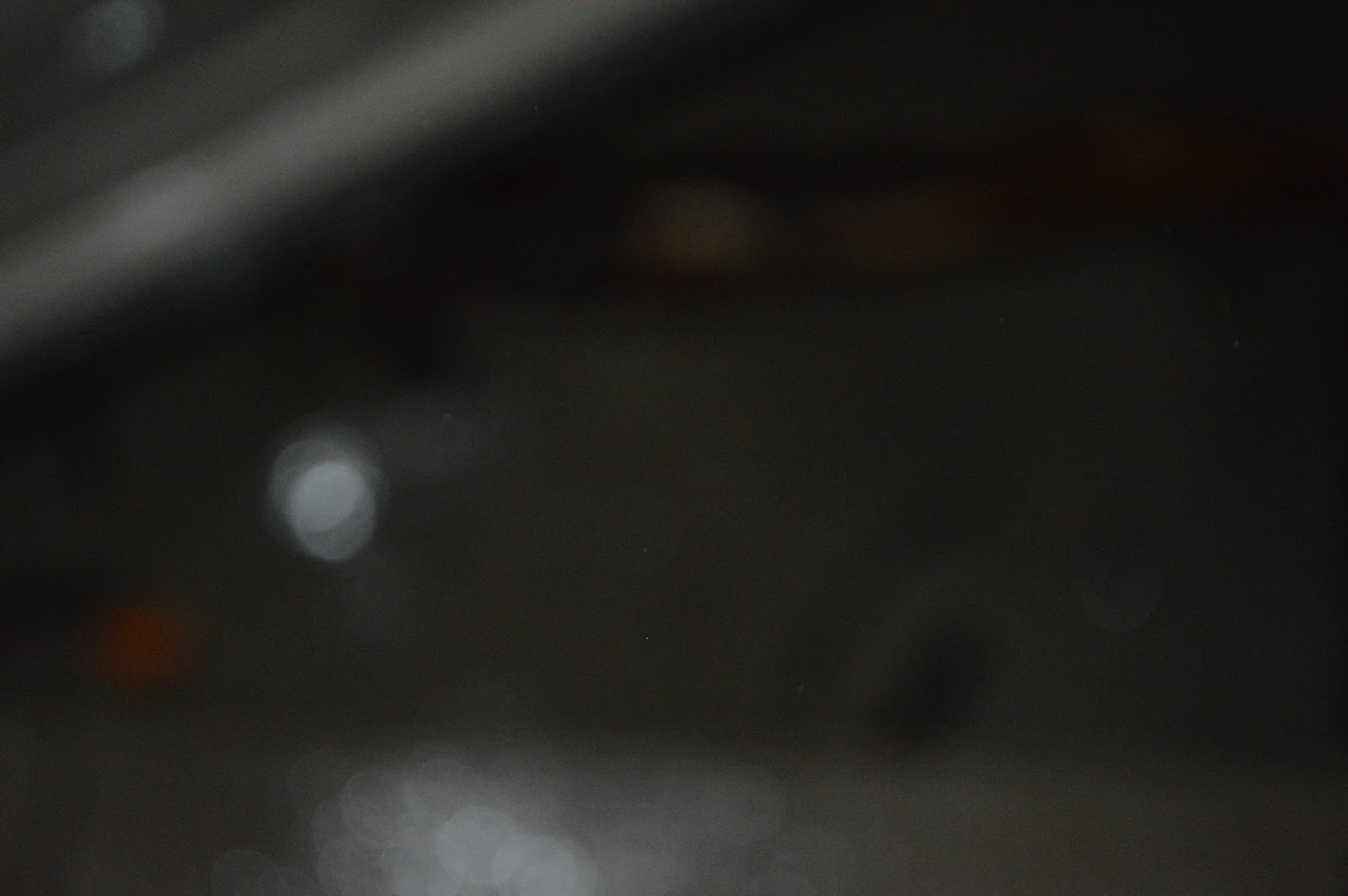 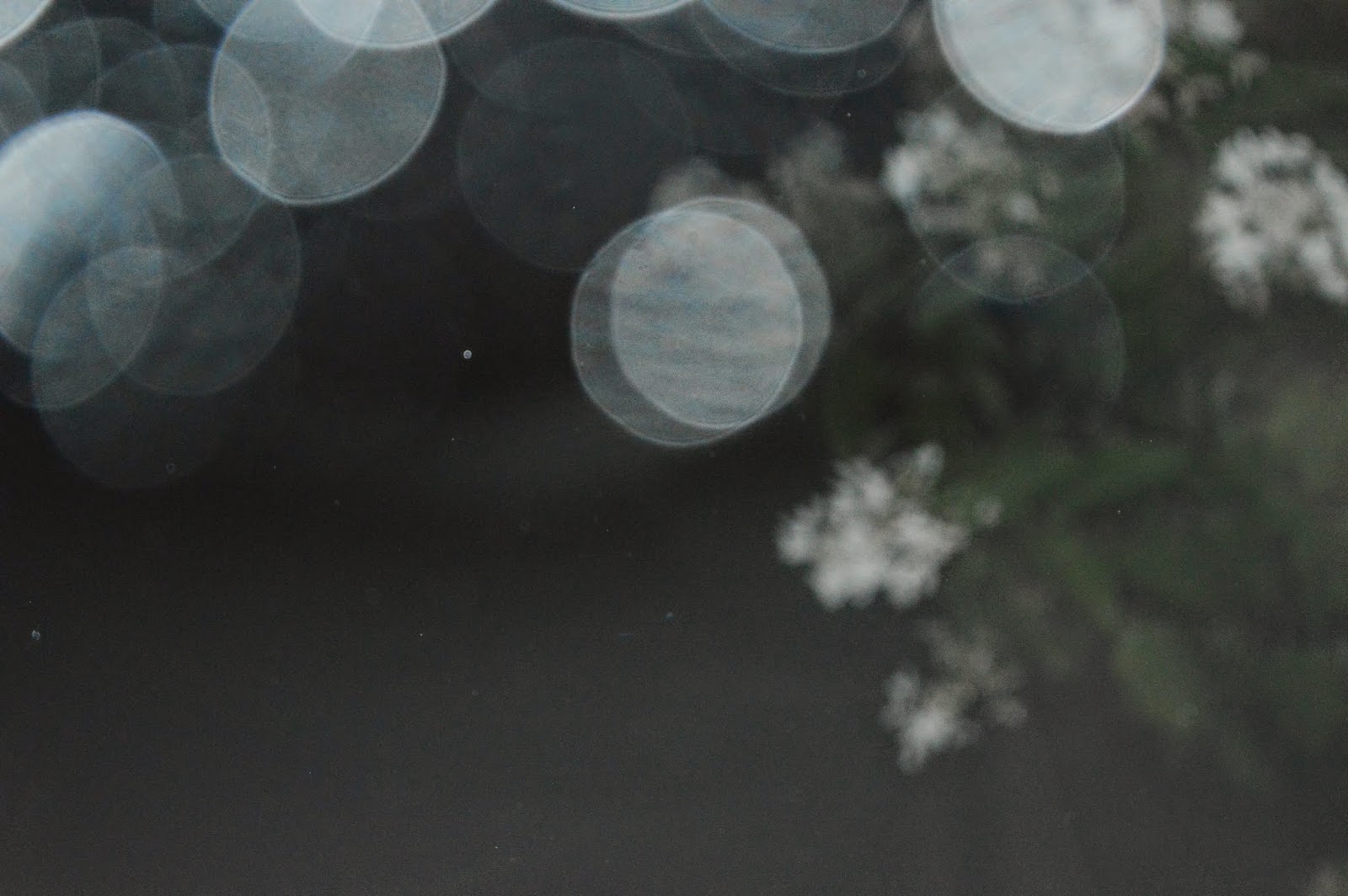 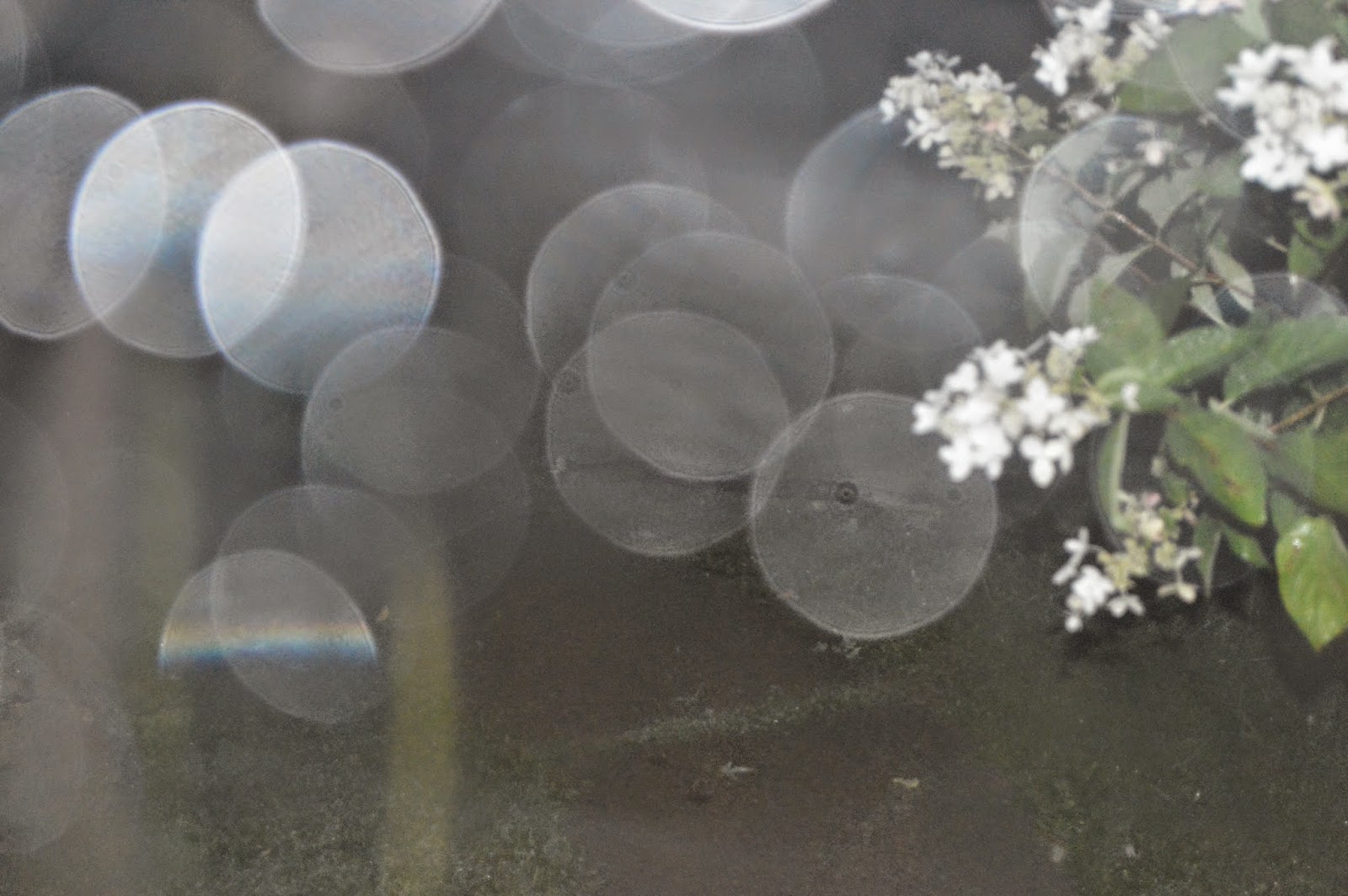 To make this a shorter story, (might be a little to late for that huh!), the next set is after clean up, doesn't look so bad, but all that stuff was blocking our street, and our neighbor had a chipper out, so by the time morning came this was left. No pictures of the back yard, lines down, not allowed back there. 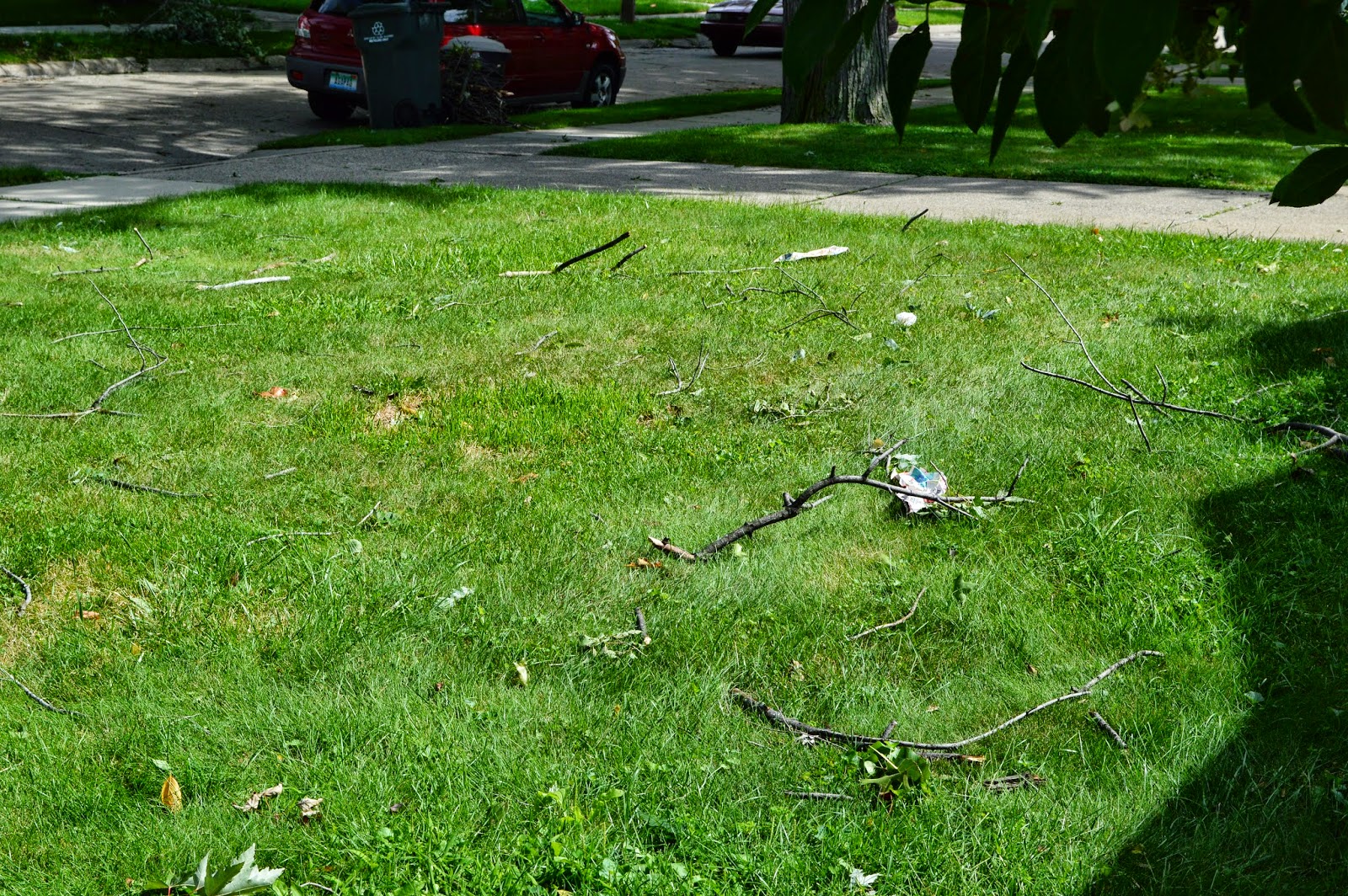 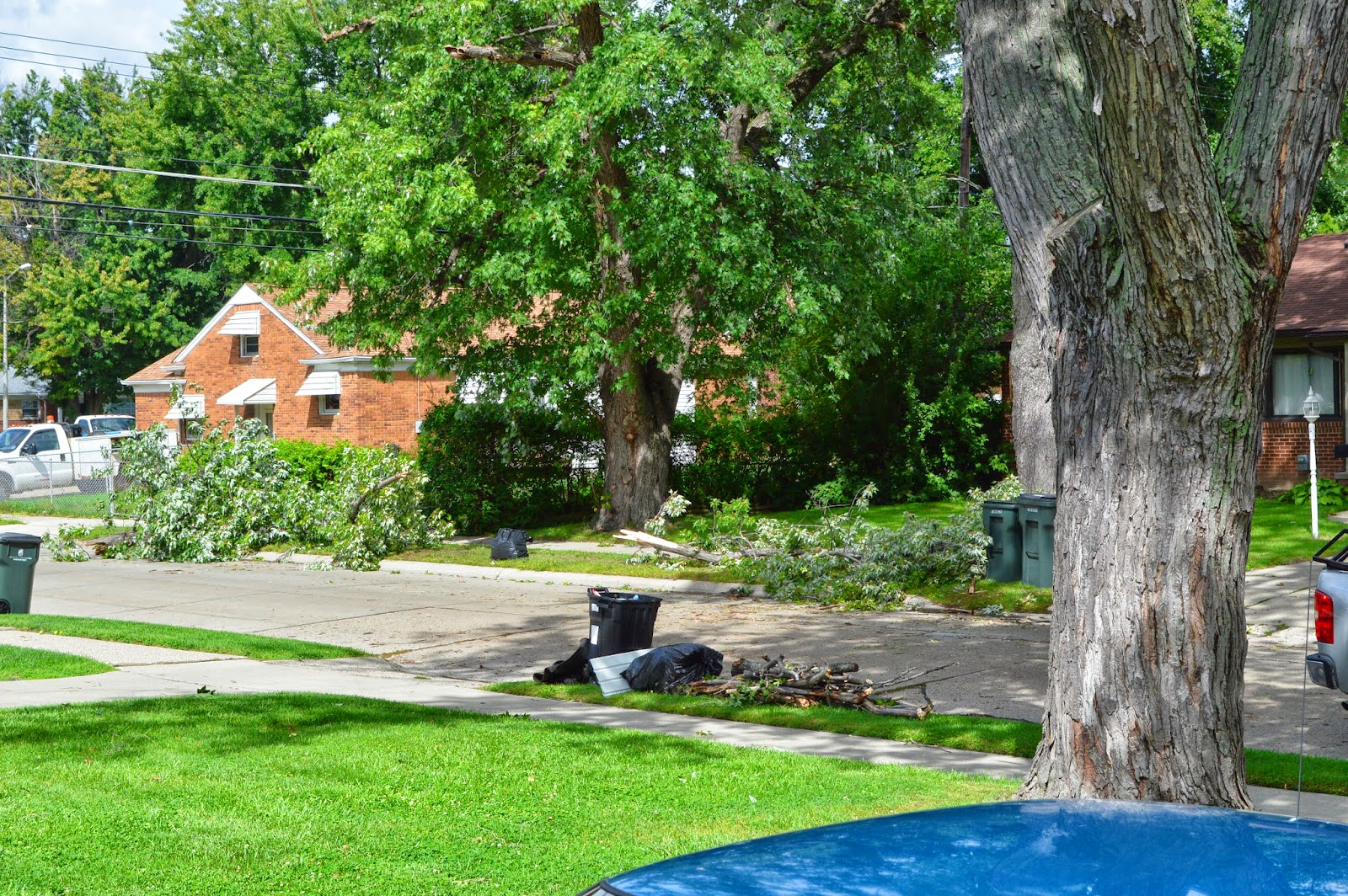 Thank goodness for good neighbors! They picked up all the big branches off our yard and removed them for us. These next pictures are the night after of the night sky.
The last picture is taken with the ISO at it's highest setting and flash on! Can you believe the flash made it all white! 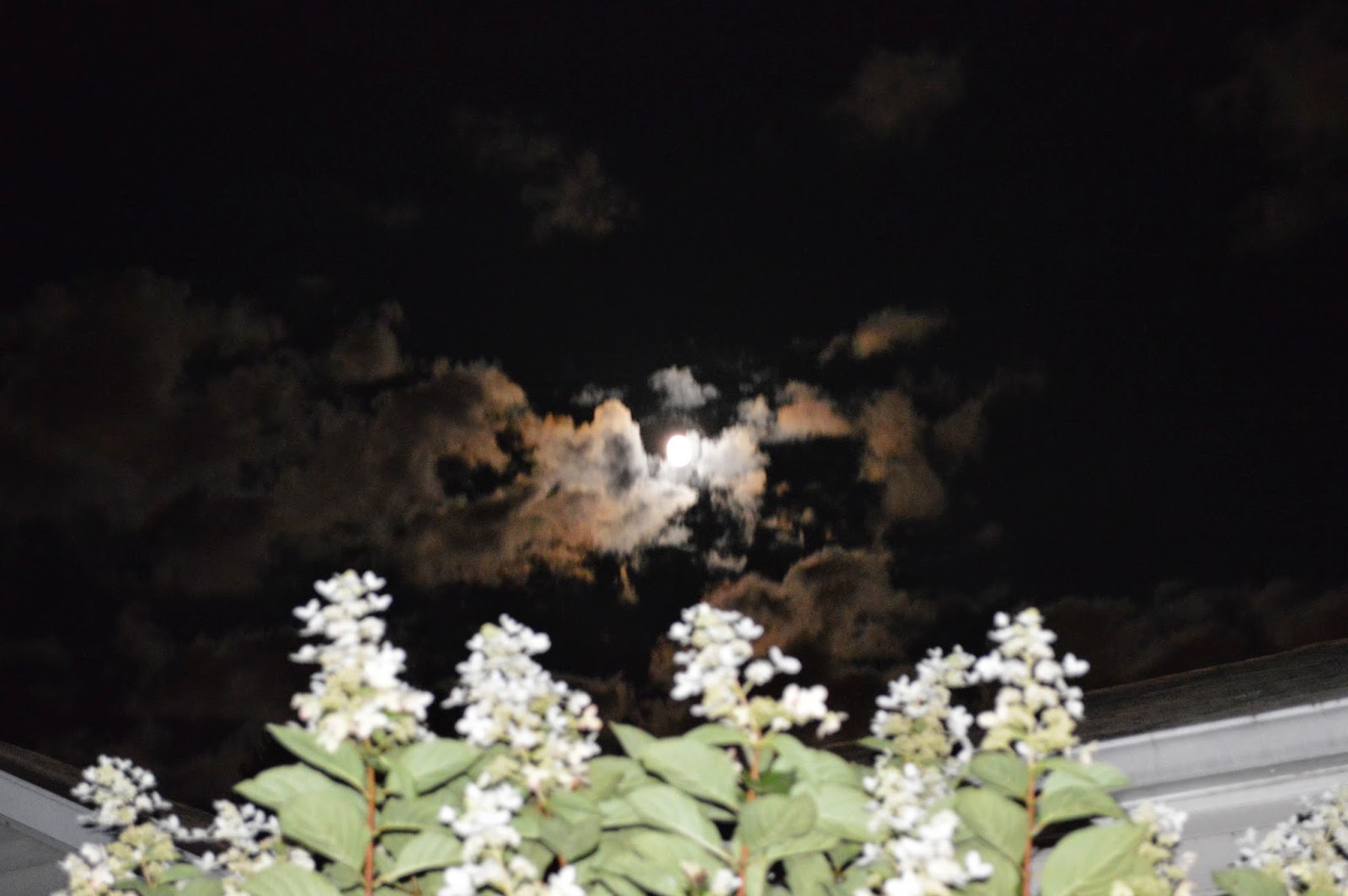 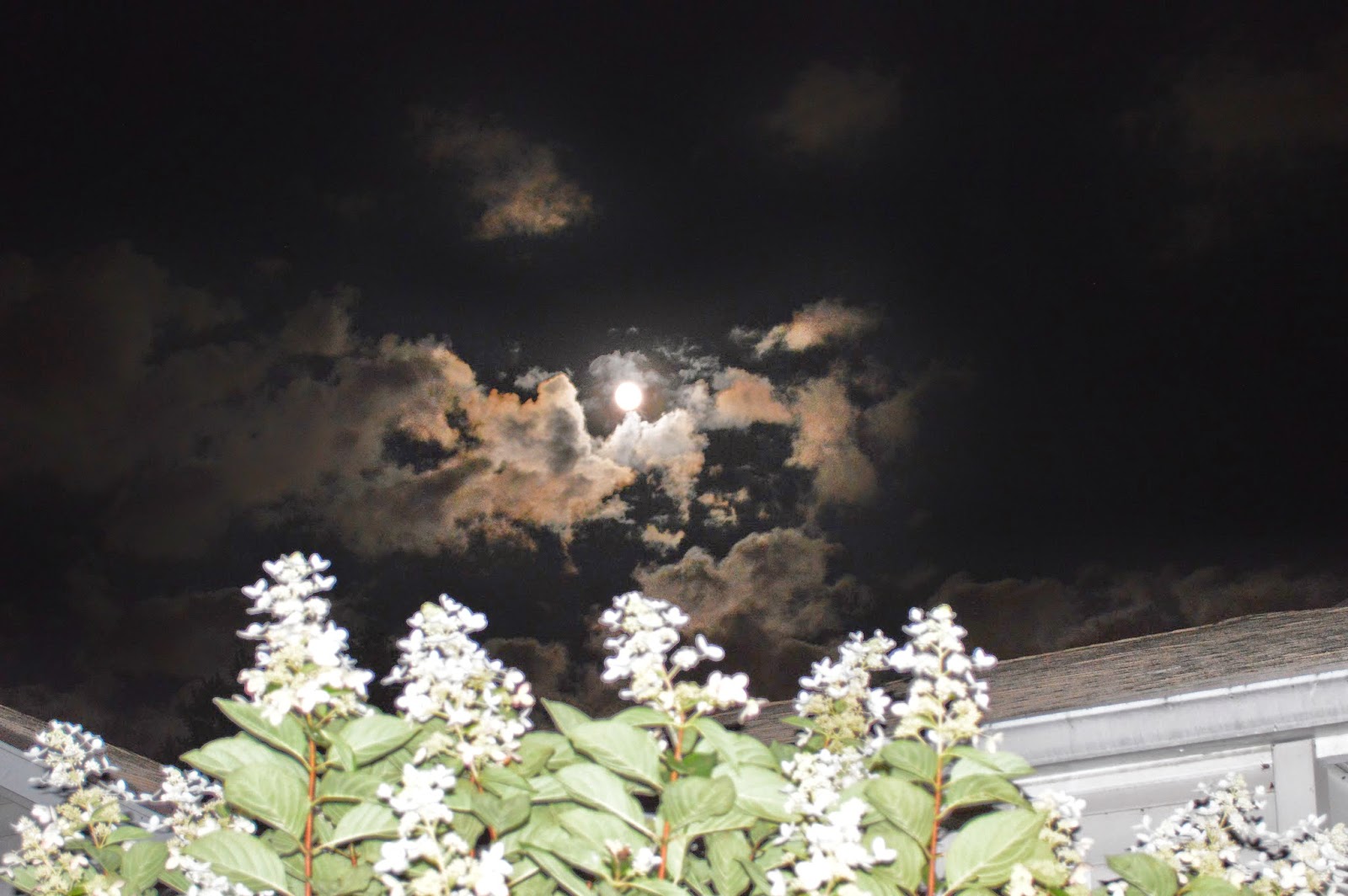 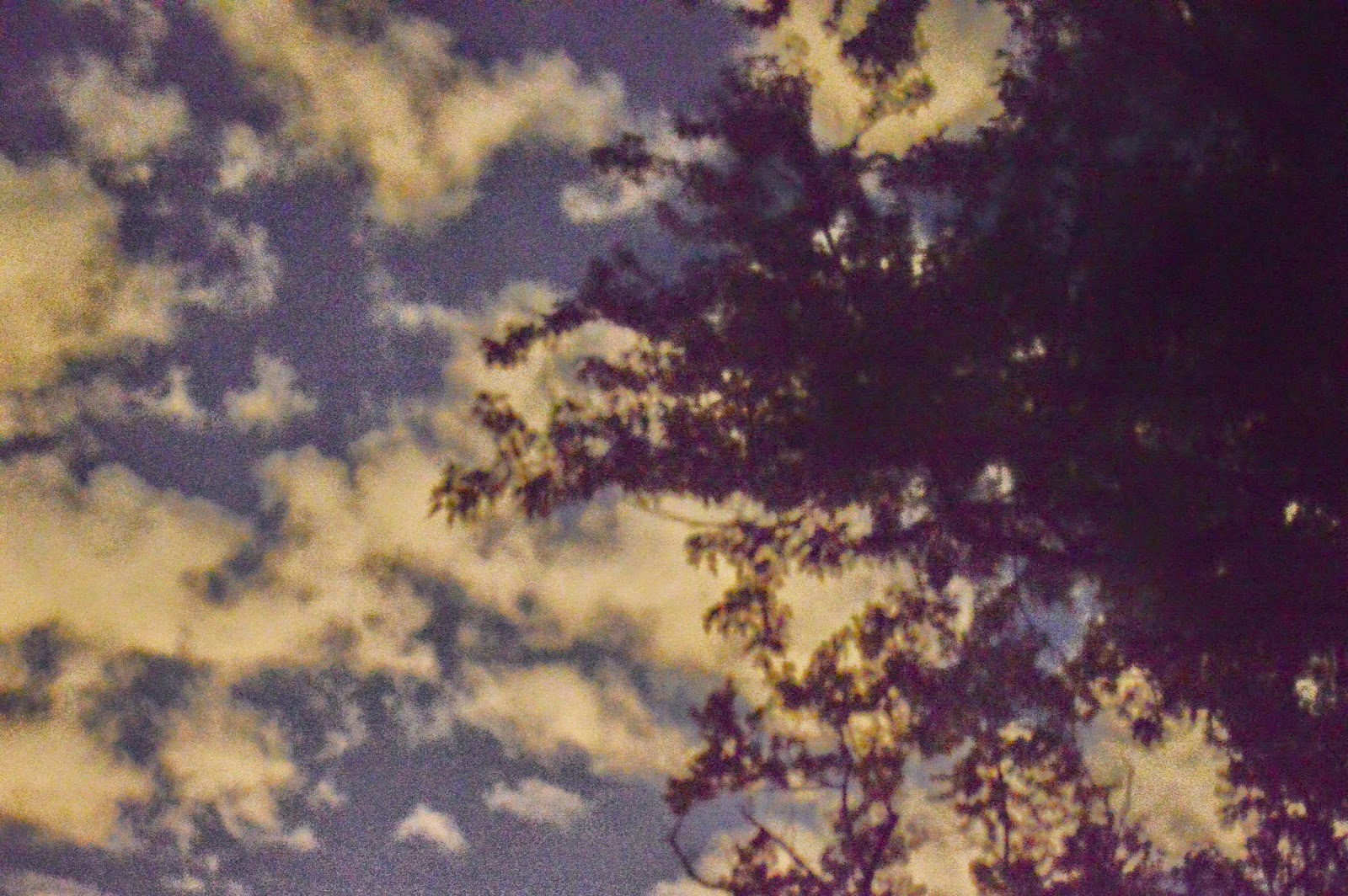 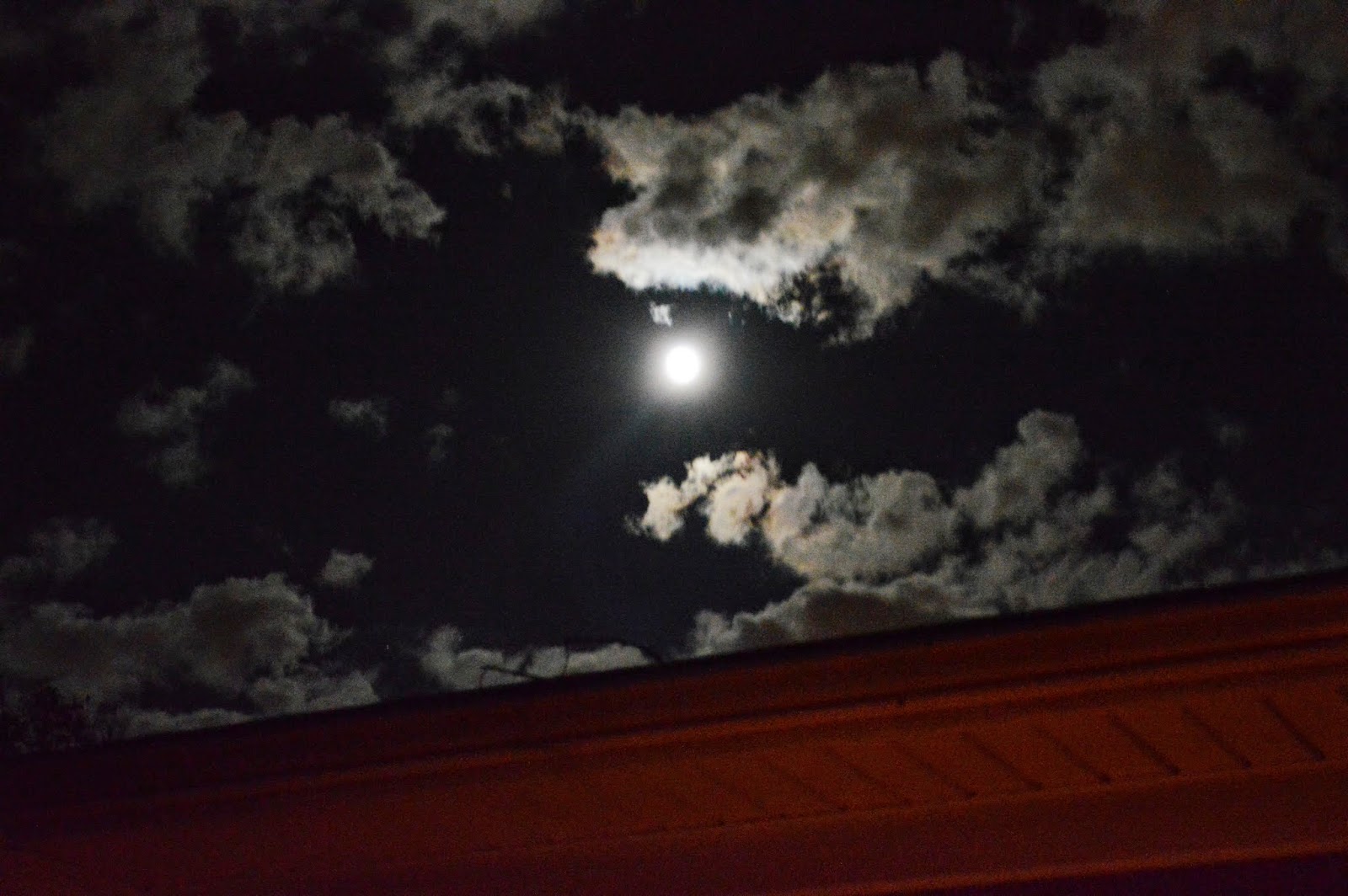 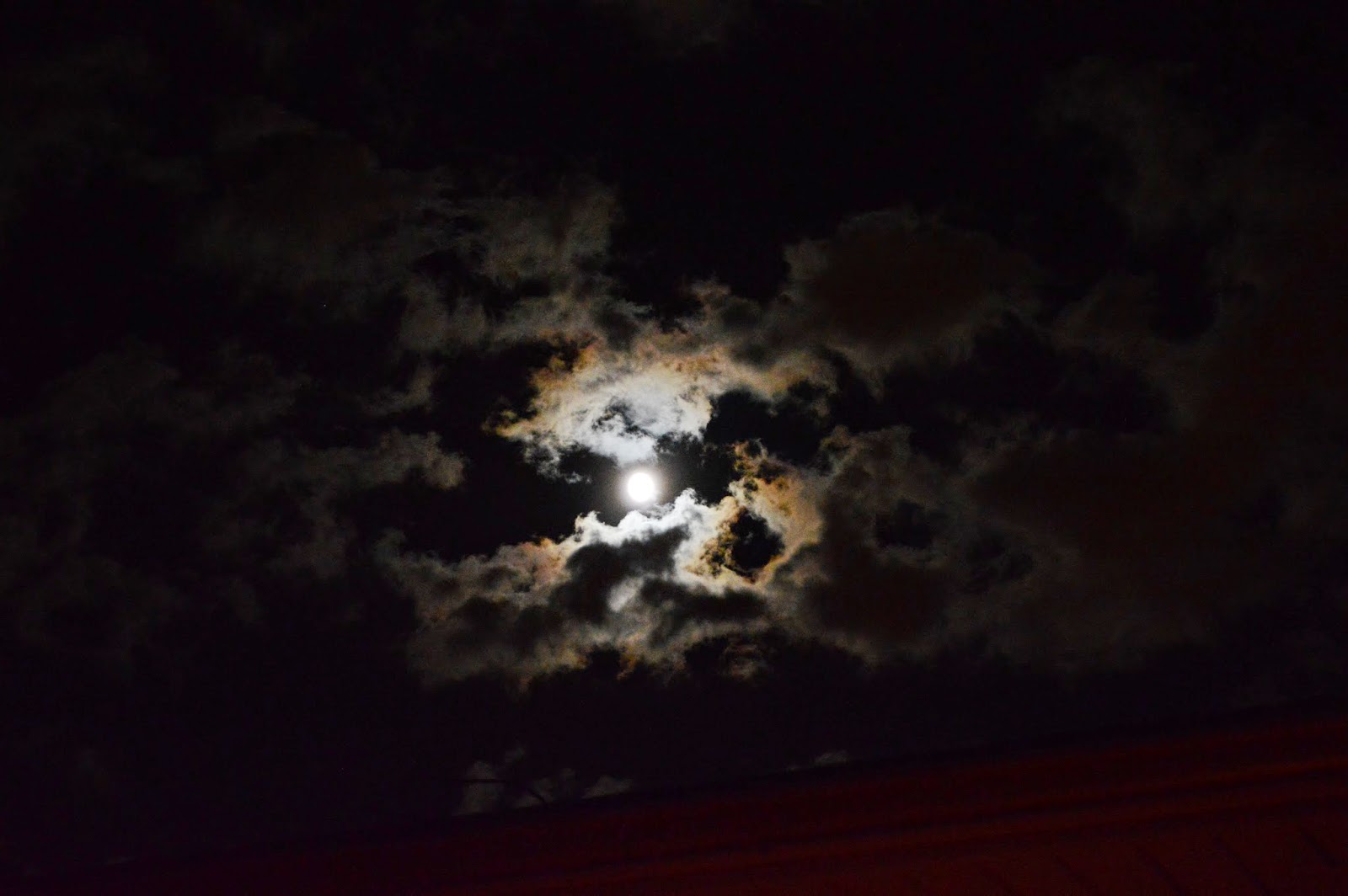 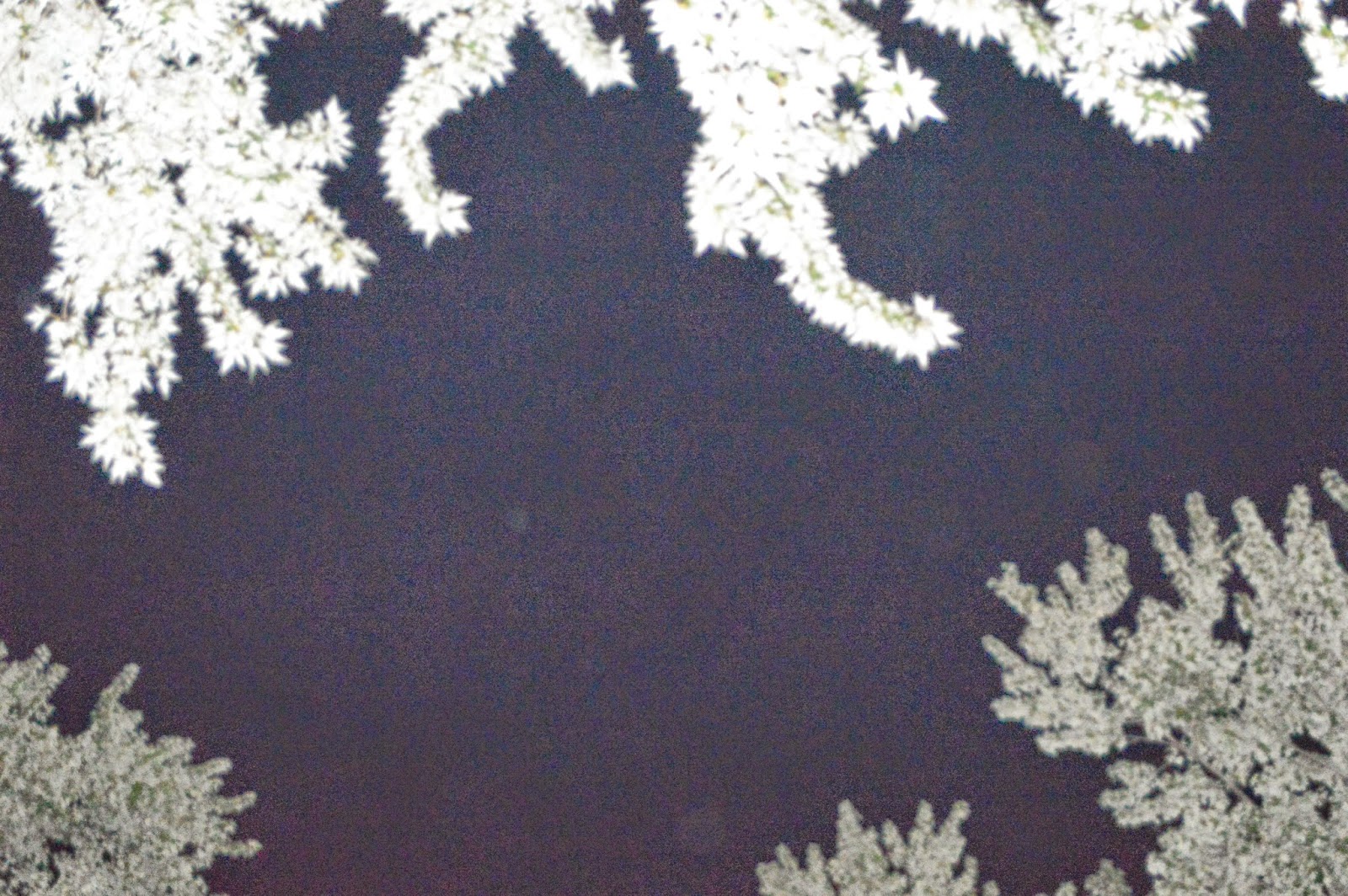 Posted by Nanettesplace at 8:39 PM 7 comments:

Hello Friends, as promised, here is Prima's Summer. I hope you love her as much as I do!  There is so much to do with these stamps, I couldn't make up my mind! I have to say there are amazing works being done in the Kraafter Kommunity on google+, I am humbled to be a part of this kommunity. And yes, i spelled it with a capital K  cause that's just how this group rolls! So much fun to be a part of this talented, friendly group! Back to Summer, I used: Flocking powder for hair, gelatos for leaves and strawberries, glitter pens for flowers and vines, eyes, and lips, bees wings,  glossy accents for lips, berries, vines, lips, eye, and bees wings, tims distress embossing powder for stamping the image. I cut the leaves out and popped them up on one end and glued directly down on other end. I also used pan pastels on her face and neck. K, so while drying she got knocked around, her lips got smudged, tried fixing, oh well, gives her character! I still love her! Lips aren't dry yet!

Thanks for looking,
Nanette

Posted by Nanettesplace at 10:55 PM 7 comments:

mixed media out of the comfort zone

Hello Friends! This weeks challenge for #ksdsept, sponsored by the kraaftshaak.com is using mixed media in a way you never have before. I have never colored a stamped image before, preferring to paper piece. So for this month's challenge, I used a Prima stamp called sharon. I used gelato's for the major coloring portion, highlighted with gel pens and stickles. I wanted her to be reminiscent of a fairy. I am also working on another prima girl called Summer. But for now, here is Sharon.

I tried showing the sparkle in different views! I will post Summer later, still deciding how I want to do her, and what to use! Thanks for looking.

Posted by Nanettesplace at 4:37 PM 10 comments: